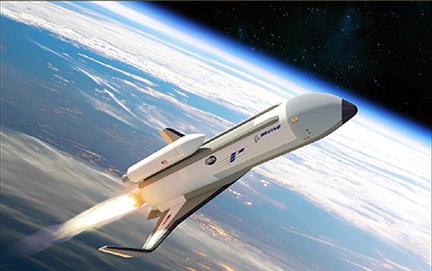 Artistic rendition of DARPA’s Experimental Spaceplane program (formerly known as XS-1) which aims to build and fly the first of an entirely new class of hypersonic aircraft that would bolster national security by providing short-notice, low-cost access to space. Image is courtesy of Boeing.

This new Boeing spaceplane, called Phantom Express, is intended to demonstrate a new paradigm for more routine, responsive and affordable space access. Aerojet Rocketdyne’s AR-22 engine, derived from the Space Shuttle Main Engine that was designed from the outset for reusability, is the main propulsion for Phantom Express.

The AR-22 engine is capable of generating about 375,000 pounds (170,097 kg) of thrust and was designed to fly 55 missions with service every 10 missions. This reusability feature makes the AR-22 ideally suited for Phantom Express. The reusable Phantom Express spaceplane will take off vertically and land horizontally. The vehicle will be equipped with an expendable second stage capable of placing up to 3,000 pounds (1,361 kg) of payload into LEO. 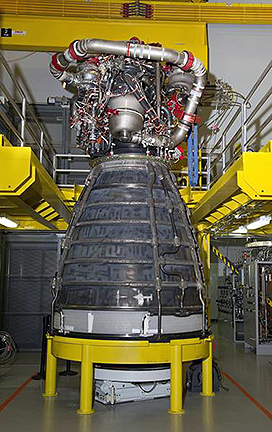 Aerojet Rocketdyne assembled the AR-22 at the company's facility at NASA’s Stennis Space Center in Mississippi. The engine will undergo a series of daily hot-fire tests at Stennis starting this summer to demonstrate its ability to support the high flight rates envisioned for Phantom Express. These tests will also provide valuable insight that will be used to refine Phantom Express flight and turnaround procedures, while also informing the design requirements for the new ground infrastructure that Boeing is developing for the flight program.

Eileen Drake, Aerojet Rocketdyne CEO and President, said that Phantom Express builds on the company's legacy of reusable space flight experience to provide the ability to quickly augment and replace on orbit capabilities, which face an increasing array of threats from potential adversaries. The company's immediate task is to demonstrate this rapid turnaround capability for this engine on the ground, paving the way for a demonstration program.

AR-22 Program Manager Jeff Haynes added that the aircraft-like operations of Phantom Express are an important factor in the rapid turnaround of this spaceplane. Additionally, the engine has a hinged nacelle that makes it easier to access and inspect the engines for rapid turnaround.