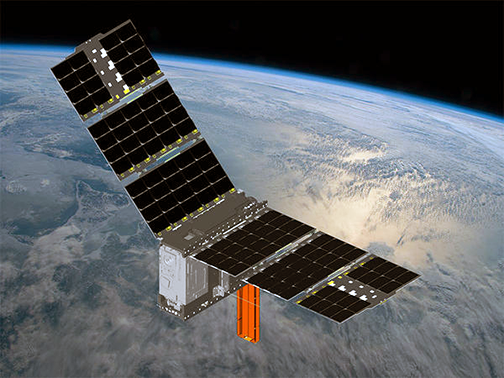 Artistic rendition of the CubeRRT smallsat.

Project leader Joel Johnson, a professor and chair of electrical and computer engineering at Ohio State, stated that the growth of man-made radio transmissions is making it increasingly difficult to detect Earth’s natural microwave radiation. This influx is called radio frequency interference, or RFI.

“The problem is only getting worse over time,” Johnson said in a university statement. “The spectrum is getting more and more crowded, due to the continued rapid growth in demand for wireless services.”

The CubbRRT effort was completed in collaboration with team members from NASA Goddard Space Flight Center in Maryland, NASA Jet Propulsion Laboratory in California and Blue Canyon Technologies in Colorado — they provided the CubeRRT spacecraft with solar power, communication, guidance and navigation systems.

The Ohio State satellite was launched via an Orbital ATK Antares rocket, which lifted off from the Wallops Island research station in Virginia early on Monday morning en route to the International Space Station with supplies. The 7,400-pound shipment — a third of it for research purposes — should reach the orbiting lab on May 24.

Prev Launch of India's GSAT-11...
Iridium's NEXT Satellite... Next