For their 11th launch of the year, and the sixth Ariane 5 liftoff from the Guiana Space Center (CSG) in French Guiana during 2017, Arianespace will orbit four more satellites for the Galileo constellation.

This mission is being performed on behalf of the European Commission under a contract with the European Space Agency (ESA).


For the second time, an Ariane 5 ES version will be used to orbit satellites in Europe’s satellite navigation system. At the completion of this flight, designated Flight VA240 in Arianespace’s launcher family numbering system, 22 Galileo spacecraft will have been launched by Arianespace with Soyuz and Ariane 5 launchers. 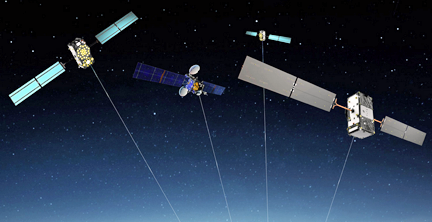 A final Ariane 5 ES mission will deploy four additional Galileo constellation satellites in 2018, after which Ariane 6 takes over launch duties from 2020-2021 — with the rocket's initial two Galileo launches contracted by ESA on behalf of the European Commission in September 2017.

The Launch Readiness Review (LRR) will take place on Friday, December 8, 2017 in Kourou, to authorize the start of operations for the final countdown. Under civilian control, Galileo offers guaranteed high-precision positioning around the world. Its initial services began in December 2016, allowing users equipped with Galileo-enabled devices to combine Galileo and GPS data for better positioning accuracy.

The complete Galileo constellation will comprise a total of 24 operational satellites (along with spares); 18 of these satellites already have been orbited by Arianespace.

ESA transferred formal responsibility for oversight of Galileo on orbit operations to the GSA (European GNSS Agency) in July of 2017. As of this launch, the GSA will be in charge of the operation of the Galileo satellite navigation systems on behalf of the European Union. GSA will be responsible for operating these satellites as soon as they separate from the launcher. Satellite positioning operations and system operation will be carried out in conjunction with ESA.

The Galileo satellites are built by prime contractor OHB System in Bremen, Germany, with the payloads supplied by UK-based Surrey Satellite Technology Ltd (SSTL), which is 99 percent owned by Airbus Defence and Space.